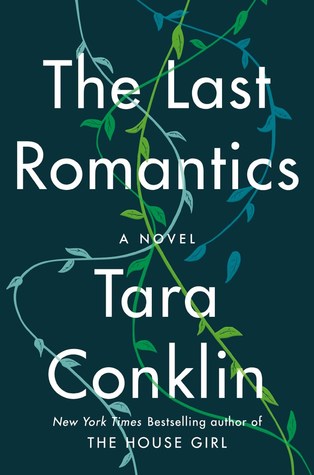 This is the story of four siblings: Renee, Caroline, Joe, and Fiona Skinner.  The book opens in the future of 2079, where Fiona has become a world-renowned poet.  While she’s giving a talk about her inspiration for her greatest work, The Love Poem, she tells the audience the tale of her family.

“The greatest works of poetry, what makes each of us a poet, are the stories we tell about ourselves. We create them out of family and blood and friends and love and hate and what we’ve read and watched and witnessed. Longing and regret, illness, broken bones, broken hearts, achievements, money won and lost, palm readings and visions. We tell these stories until we believe them.”

The book jumps back and forth in time so we get to experience the Skinner siblings as children who have to deal with losing their father in his thirties, their mother’s crippling depression after losing her husband, (what the children forever call “the Pause”), and how they grow up dealing with the loss and betrayal.   Twenty years later, their love for each other is again tested after the sudden death of their “golden boy” brother Joe.

When their brother dies, he is seeing a woman named Luna.  His sisters do not know of Luna’s existence until after they find a Polaroid of the couple while cleaning Joe’s apartment.  His death, as well as the realization that his brother was in love when he died, pushes the sisters to consider their life choices and examine what exactly they love in their lives.   Renee (the type-A doctor who never married nor had children), Caroline (the one who married and had children at a young age), and Fiona (who runs a blog detailing her numerous sexual exploits including the shortcomings of those men) all deal with some turmoil and revelations about themselves while searching for their brother’s girlfriend.  Don’t let the title fool you – this is NOT a romance novel.

This book was just “OK” for me.  I enjoyed parts of the story, and could certainly identify with some of the family dynamics, but overall this isn’t what I would consider a “page turner”.   We’ve all lost someone we were close to – even those who served as the “anchors” in our families, where after they were gone people seemed to drift away from each other.   There was a lot of heartache as well as a few scenes of animal cruelty.  I don’t judge those who like literary fiction like this – but I feel that the world is sad and full of loss anyway, when I read I want something mysterious or romantic or funny.

I would not hesitate to recommend this book – it’s well written and interesting enough for a read.  However, it’s not light “beach reading” and I’m woman enough to admit that I cried at the ending.  I need to also bring up the fact that because we only get Fiona’s side of the story, there are several questions that are left unanswered.

If you enjoy emotionally heavy sweeping family dramas, then this one is for you.