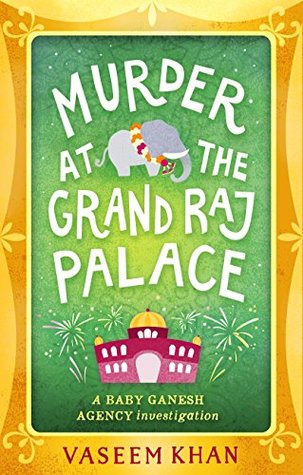 There’s been a murder in a fancy hotel!  And the Baby Ganesh Agency is back again to investigate!

I just finished reading Murder At The Grand Raj Hotel, and I am such a fan of this series!  This is the forth book in the Baby Ganesh series (I’ll list them all at the bottom) and each book gets better than the last.  Charming characters who take you though twists and turns make for an entertaining page-turning “Who-Done-It”.

If you’re looking for grime, noir, or gore – this book isn’t for you.  It’s just a good clean murder investigation by a retired Indian police detective named Chopra, his wife Poppy, the orphan they’ve adopted as their son, Irfan, and an elephant calf named Ganesha inherited by Chopra from a long-lost relative.

When the murder of American billionaire Hollis Burbank takes place at the iconic Grand Raj Palace Hotel, authorities are quick to label it a suicide and close the case.  As Burbank has just purchased India’s most expensive painting, Inspector Chopra is called and and discovers an entire hotel of people who have means and motive to want Burbank dead.  With his trusty sidekick, baby elephant Ganesha, Chopra navigates his way through the large hotel, a journey that leads him closer and closer to a killer.

In a secondary story line, Poppy is upset that Chopra seems to be ambivalent about their anniversary as he pursues his murder investigation.  Poppy follows him to the Grand Raj and turns into an investigator herself  as she searches for a bride who seems to have disappeared into thin air right before her wedding.  The fact that the bride is an Indian princess, and the wedding will combine two large royal families who have feuded for a century, makes Poppy’s investigation as thrilling as the murder her husband is trying to solve.

If you enjoy mysteries, you will enjoy this book.  Mr. Khan is an excellent writer and I enjoyed every page!

The Unexpected Inheritance of Inspector Chopra

The Perplexing Theft of the Jewel in the Crown

The Strange Disappearance of a Bollywood Star

Murder at the Grand Raj Palace