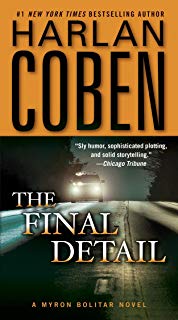 I’m reading my way through the Myron Bolitar series and loving it!

Book 6 in the series is every bit as good as the first five.  I’m looking forward to the next five – and based on how I love to stay up and finish Coben’s book, it won’t take me long.

Myron is back in The Final Detail dealing with a twisting mystery dealing with betrayal, family secrets, and, of course, murder.

Esperanza has been arrested for the murder of a fallen baseball star trying to come back.  It doesn’t help that he’s also a client of BM SportsReps.  Myron believes Esperanza is innocent, but the more clues he finds, the more guilty she appears.  And if it wasn’t her, the only other suspect based on the evidence is Myron himself.  Esperanza won’t speak to Myron on the advice of her lawyer, which makes Myron’s investigation that much harder.    Myron is warned away from the investigation, but the stakes are too high for him, Esperanza, and the future of his company. 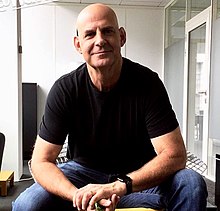 My favorite part of any Harlan Coben novel is the humor.  He’s excellent at throwing a joke in to lighten a tense scene.  AFTER the humor though, my favorite parts are the supporting characters.  In this book we learn Big Cindy’s back story and while it’s sad and poignant, Myron’s reactions and thoughts during the story are funny.  The dynamic of these two characters while their “buffer” is in jail shows Coben’s amazing storytelling ability.

I’m sure most Coben fans have read through this series before, but as I said in my review of One False Move: If you haven’t read these yet, do yourself a favor and start now.  You’ll thank me later!