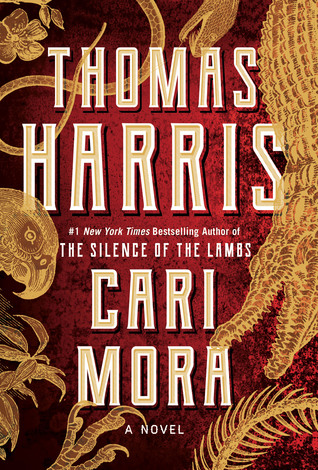 Sadly, fans of Hannibal Lecter cannot believe they waited for 13 years and were rewarded with a “boring, predictable book with worst plot reminds you of low budgeted action movies stars” from Dr. Lecter’s creator, Thomas Harris.

Right now, this book only has 2.96 stars on Goodreads and 2.4 stars on Amazon.

While most of the reviewers on those sites agree that Mr. Harris is an accomplished and well-loved author, their comments note that this book misses the mark and some reviewers didn’t even finish it.   Mr. Harris’ talents were obviously not on display this time around.

About Cari Mora (from the back cover copy)

A resilient young woman must outwit a sadistic psychopath in this pulse-pounding thriller from the author of The Silence of the Lambs, a “master still at the top of his strange and chilling form” (Wall Street Journal).

Twenty-five million dollars in cartel gold lies hidden beneath a mansion on the Miami Beach waterfront. Ruthless men have tracked it for years. Leading the pack is Hans-Peter Schneider. Driven by unspeakable appetites, he makes a living fleshing out the violent fantasies of other, richer men.

Cari Mora, caretaker of the house, has escaped from the violence in her native country. She stays in Miami on a wobbly Temporary Protected Status, subject to the iron whim of ICE. She works at many jobs to survive. Beautiful, marked by war, Cari catches the eye of Hans-Peter as he closes in on the treasure. But Cari Mora has surprising skills, and her will to survive has been tested before.

Monsters lurk in the crevices between male desire and female survival. No other writer in the last century has conjured those monsters with more terrifying brilliance than Thomas Harris. Cari Mora, his sixth novel, is the long-awaited return of an American master.

Thomas Harris (born April 11, 1940) is an American writer, best known for a series of suspense novels about his most famous character, Hannibal Lecter. All of his works have been made into films, the most notable being the multi-Oscar winning The Silence of the Lambs, which became only the third film in Academy Award history to sweep the Oscars in major categories.

If you’re inclined to try it yourself, buy it from Amazon here.