Coming Tomorrow: No One Is Too Small To Make A Difference by Greta Thunburg

Book Marks Coming Tomorrow: No One Is Too Small To Make A Difference by Greta Thunburg 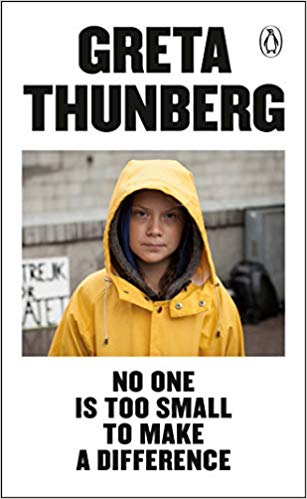 The groundbreaking speeches of Greta Thunberg, the young climate activist who has become the voice of a generation, including her historic address to the United Nations will be available in her new book out tomorrow.  No One Is Too Small To Make A Difference encapsulates Greta’s attitude towards climate change and unbreakable spirit.

Back Cover Copy of No One Is Too Small To Make A Difference:

In August 2018 a fifteen-year-old Swedish girl, Greta Thunberg, decided not to go to school one day in order to protest the climate crisis. Her actions sparked a global movement, inspiring millions of students to go on strike for our planet, forcing governments to listen, and earning her a Nobel Peace Prize nomination.

No One Is Too Small to Make A Difference brings you Greta in her own words, for the first time. Collecting her speeches that have made history across the globe, from the United Nations to Capitol Hill and mass street protests, her book is a rallying cry for why we must all wake up and fight to protect the living planet, no matter how powerless we feel. Our future depends upon it.

Greta Thunberg is a Swedish teenage environmental activist on climate change whose campaigning has gained international recognition.  Thunberg first became known for her activism in August 2018 when, at age 15, she began spending her school days outside the Swedish parliament to call for stronger action on global warming by holding up a sign saying (in Swedish) “School strike for the climate”. Soon, other students engaged in similar protests in their own communities. Together, they organised a school climate strike movement under the name Fridays for Future. After Thunberg addressed the 2018 United Nations Climate Change Conference, student strikes took place every week somewhere in the world. In 2019, there were at least two coordinated multi-city protests involving over one million students each.