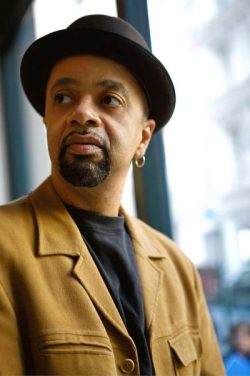 James McBride is an author, musician and screenwriter.

His landmark memoir, The Color of Water rested on the New York Times bestseller list for two years. It is considered an American classic and is read in schools and universities across the United States.  His debut novel,  Miracle at St. Anna was translated into a major motion picture directed by American film icon Spike Lee. It was released by Disney/Touchstone in September 2008.  James wrote the script for Miracle At St. Anna and co-wrote Spike Lee’s 2012 “Red Hook Summer.” His novel, Song Yet Sung was released in paperback in January 2009. His novel The Good Lord Bird  about American revolutionary John Brown, is the winner of the 2013 National Book Award for Fiction.

His new book, Deacon King Kong, is a wise and witty novel about what happens to the witnesses of a shooting.  Purchase your copy here. 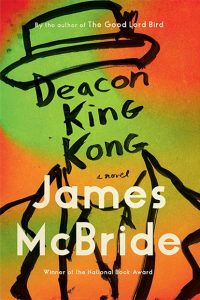 In addition to being a musician, James has other talents. He’s the worst dancer in the history of African Americans, bar none, going back to slavetime and beyond. He should be legally barred from dancing at any party he attends. He dances with one finger in the air like a white guy. He has other skills too. Like when he takes off his hat, fleas fly out. Stuff like that. Little things. Little talents.

James is also a former staff writer for The Boston Globe, People Magazine and The Washington Post. His work has appeared in Essence, Rolling Stone, and The New York Times. His April, 2007 National Geographic story entitled “Hip Hop Planet” is considered a respected treatise on African American music and culture.

James toured as a saxophonist sideman with jazz legend Jimmy Scott, among others. He has also written songs (music and lyrics) for Anita Baker, Grover Washington Jr., Purafe, Gary Burton, and even for the PBS television character “Barney.” He did not write the “I Love You” song for Barney but wishes he did. He received the Stephen Sondheim Award and the Richard Rodgers Foundation Horizon Award for his musical “Bo-Bos” co-written with playwright Ed Shockley.  His  2003 “Riffin’ and Pontificatin’ ” Musical Tour was captured in a nationallly televised Comcast documentary. He has been featured on national radio and television in America, Europe, Australia and New Zealand. He often does his readings accompanied by a band.

James is a native New Yorker and a graduate of  New York City public schools. He studied composition at The Oberlin Conservatory of Music in Ohio and received his Masters in Journalism from Columbia University in New York at age 22. He holds several honorary doctorates and is currently a Distinguished Writer in Residence at New York University.