The National Book Critics Circle Award for Fiction: Everything Inside: Stories by Edwidge Danicat

The National Book Critics Circle Awards honor the best literature published in the United States in six categories – autobiography, biography, criticism, fiction, nonfiction, and poetry.  These are the only national literary awards chosen by critics themselves.

This year’s winner in the fiction category was Everything Inside: Stories by Edwidge Danicat 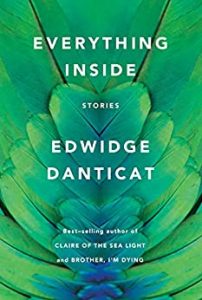 In these eight powerful, emotionally absorbing stories, a romance unexpectedly sparks between two wounded friends; a marriage ends for what seem like noble reasons, but with irreparable consequences; a young woman holds on to an impossible dream even as she fights for her survival; two lovers reunite after unimaginable tragedy, both for their country and in their lives; a baby’s christening brings three generations of a family to a precarious dance between old and new; a man falls to his death in slow motion, reliving the defining moments of the life he is about to lose.

About Edwidge Danicat:  Edwidge Danticat was born in Haiti in 1969 and came to the United States when she was twelve years old. She graduated from Barnard College and received an M.F.A. from Brown University. She made an auspicious debut with her first novel, Breath, Eyes, Memory, and followed it with the story collection Krik? Krak!, whose National Book Award nomination made Danticat the youngest nominee ever. She lives in New York.