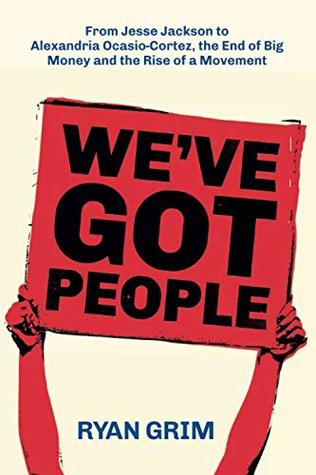 We’ve Got People: From Jesse Jackson to AOC, the End of Big Money and the Rise of a Movement by Ryan Grim was released May 23, 2019.

If you’re into politics and history, then this look at the current progressive political movement is for you.  Why wouldn’t you want more information on the people who are currently shaping our political landscape – and probably will for years to come.

Back Cover Copy of We’ve Got People:

Alexandria Ocasio-Cortez may seem like she came from nowhere, but the movement that propelled her to office – and to global political stardom – has been building for 30 years. We’ve Got People is the story of that movement, which first exploded into public view with the largely forgotten presidential run of the Rev. Jesse Jackson, a campaign that came dangerously close to winning. With the party and the nation at a crossroads, this timely and original book offers new insight into how we’ve gotten where we are – and where we’re headed.

Ryan Grim is an author, former Washington bureau chief for HuffPost and The Intercept, and a liberal / progressive political commentator for The Young Turks. His writings have appeared in several publications, including Rolling Stone, The Washington Post, and Politico. He is the author of This Is Your Country on Drugs. He cofounded Strong Arm Press, an independent progressive publishing house.