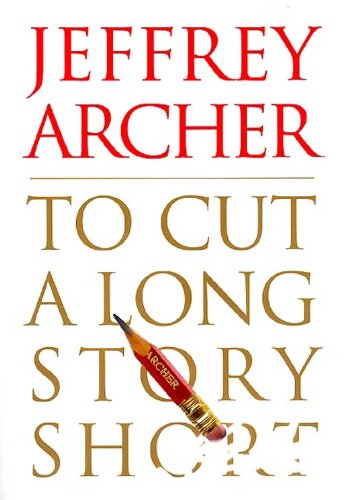 If you’re a fan of short stories, this collection is amazing!  It was released in 2000 and I’m so sorry I haven’t picked it up before now.

Before picking up this collection at my local Friends of the Library used book sale, I had never read a Jeffrey Archer novel.  I’m sorry… let me rephrase: a Jeffrey Howard Archer, Baron Archer of Weston-super-Mare novel.   That’s right, he’s a Baron, AND a writer, AND a former politician.    This fact makes me feel very lazy.

Archer was a member of the English Parliament from 1969 to 1974 before becoming an author.  In a story that sounds like fiction, Archer did not seek reelection when a financial scandal left him nearly bankrupt, however, he revived his fortunes by becoming a best-selling author.  He did go back into politics in the 1980s and ’90s, and his books have now sold over 330 million copies worldwide.   Not bad for a simple Barron.

The outstanding element in all of these stories is the outrageous and yet believable characters:  the intoxicating woman who appears to her lover only once every six years; the British diplomat who employs his rather creative — if not entirely ethical — financial talents for a greater good; the millionaire who declares himself bankrupt to test the love and loyalties of those closest to him.

My favorite story (and one that will stick with me for a long time) was The Reclining Woman.  This tale is based on a true story told from the perspective of a patron at an art museum listening to a museum guide speak about a statue’s origin.  Being a fan of museums and art, I naturally found this intriguing and want to know what elements of the story are true!

Coming from a paralegal background, I also enjoyed The Expert Witness as well as Both Sides Against The Middle – both based on true stories, and centering around a legal element.

Essentially, I think there’s something for everyone within these pages – romantics, mystery readers, crime….uhm…..enthusiasts, and anyone who enjoys well-crafted prose.  If you enjoy short stories – or even if they aren’t really your cup of tea – give this book a try.  It’s very enjoyable!